Dedicated to 'the effort' to deceive

The amount of effort spent to deceive and pursuade The Sentinel with false information has been unbelieveable.  Just below is one of the illustrations of such efforts that has been published on the Polk Co page for some time.  I have to make some space on that page but couldn't bring my self to discard this illustration of effort that agents of globalism, communism, and any other 'ism' The Setinel has spoken against would spend to ruin our credibility.  As time permits, I will add some more stories along with the 'evidence' people have produced along the way.  Much will consist of emails, texts and such to show the journey to the truth of the matter like this one below was.  My favorite is the 'Black Flag Media' one so we will add it to the bottom.  At left is a teaser of the 'evidence' submitted.

"DON'T TEAZE ME BRO"   This article below is aboout the first one that I knew better than just because I know better.   Despite my differences with Sherriff Hammack and Chief Lyons over answers and information, both men have a better reputation than this nonsense.  It took two days to find the orginal video but I knew it was there. 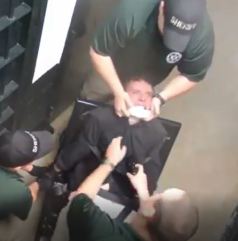 This is a screen snip out of a video submitted to The Sentinel yesterday showing an Inmate bound and being tortured with a tazer by county sheriff deputies.

Above  is an 'evidence' photo submitted by the same source.

The only problem is that it was just a well crafted attempt to get us to run a false story about the Polk Co S.O. that could be debunked.  Instead, we debunked it first but tried to have a little fun with the 'source' first.  They went quiet and the phone number doesnt work.  It shows to be a good number assigned to someone in downtown Livingston but when you call it, it is a non working number.  Hmmmmm

The video is a county sheriff inmate being tortured but it was published on youtube long before the 'source' claimed the incident occurred to 'her son' in Polk Co.  The event is real but it actually occurred in Tennessee.  The Cheatam County S. O. uniforms are almost identical to Polk Co.  The photo at right is a legitimate photo off of the Polk Co. S.O. website.  There is a woman on the fringe of the video that does have similar characteristics to the female deputy in the P.C.S.O. photo.  The perpetrator even supplied me a photo of her 'son' and close ups of tazer wound marks.  I wonder who would go to such great lengths that has an interest in ruining The Sentinel's credibility right now?   They don't know me.  I do make mistakes on occassion and even mixed up a sr and jr once in a pool party story but we do scrutinize everything that is submitted to The Sentinel despite whether the source is anonymous or names themselves.   This one didn't pass.

BLACK FLAG MEDIA was an interesting ploy and more sophisticated than most but still a ploy.  My research shows that in history, the Black Flag equates to assasins or Anarchists.  You will see how 'convincing' this effort is if you follow the progression of emails and 'evidence' they supplied.   We will start with the first email I received and screen shot of a cell spy catcher graphic.   We state again for the record that The Sentinel does not endorse or believe most of the content but publish it here just to show how much effort some folks will go to in their bid to discredit our publication.

I have recently became aware of your work and support your site's position of its First Amendment work. I wanted to caution you that I have been tracking an IMSI catcher aka as a "stingray" device operating in Polk County. The two localized areas are near the intersections of US-59 and US-190 in Livingston and in Onalaska. Several times, which ever agency is running this device has attached it to my phone. However, unknown to whomever is operating this device, I am aware of when they do it, and it just gives me more data to help with my next phase, identifying the agency operating the device and locating the physical location of the device/operator and documenting them in the act. May I suggest that you review your communications protocols within your organization and utilize secure methods, such as the Signal messaging app to prevent 3rd parties from monitoring your private communications. Attached is a screen print of my sensing program picking up the potential operation of the Stingray this evening in Onalaska, near the bridge. Again, take care...haven't you ever wondered how Polk County law enforcement agencies have such a high arrest rate on drug cases? Well, the illegal use of a device, such as the one I mentioned would give these agencies a tactical advantage in circumventing the 4th amendment and from my research, most of the time this method of evidence collection is never revealed in a trial to the defense, based on research on the use of such tactics. Again, take care, because it is quite possible someone could be listening to you! J. P. Zenger Sent from ProtonMail mobile

From a 4th amendment standpoint, I would twist that xxx up for them if I could prove it but from a personal standpoint, it is just like that computer The Rangers came and got a week after I surrendered to their warrants, there was no password on it or any virus protection.  It would piss me off to know they were doing that in our community but I am not going to lose any sleep about what they might have heard me say.  Truth be known, I presume Orwell is listening and taunt them with stuff I talk about that they know I can prove.
In all seriousness, I had an opportunity to learn quite a bit about cellular towers and the workings of them and even the dark fiber being lit up for pennies on the dollar these days.  I know several young men that do tower work in this area and have been told they were instructed to look for exactly what you are claiming and in fact found some.  That has been over a year ago though.
If there is one up and operating and you can pinpoint the tower, I will help anyway I can.
Steve Watson

At this point in the story, I had not done any research or investigation into the Black Flag media identity.  I was just responding to an email with the name of a prominent historical figure affixed to it.   Below are several documents and photos he attached. 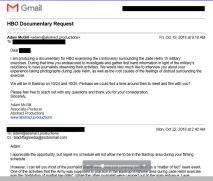 This email along  with a generic photo of a white bus were submitted to establish his credibility.  I had to have a little fun as you will see in my reply

Mr. Watson:
As I promised, I would send you an example of my journalistic credentials.
Attached is a request I received last month from a documentary producer requesting my participation in a project for HBO Films on the Defense Department exercise, known as "Jade Helm" that took place in several locations in the United States, which included the U. S. Army's Camp Swift in Bastrop, Texas and the surrounding areas. My research verified the claim many people were making prior to this operation that one of the primary goals of the Jade Helm operation was to practice techniques for the introduction of martial law on American soil.
As you can see, I am known for my work within journalistic circles, but my "Clark Kent day job" is not conducive to doing this type of work actively, at the moment. I am going to be leaving this job in the near future and will be launching a web-based investigative journalism platform. I am in the preparation phase, but currently have experienced "stepped-up" efforts by various parties to monitor my activities. Information gathered in the past by my journalistic efforts would have definite negative consequences for many, especially those in our nation's capital.
The various activities of officials in Polk County have not really been "on my radar", however I am aware of a certain case that Mr. Hon is directly involved in where an innocent man was allegedly framed by various individuals and is currently in prison for a crime that he did not commit. His appeal has been delayed by missing documents and other evidentiary items that are currently "missing" or  "unavailable" according to the Polk County District Attorney's office.
As I communicated earlier, I have mapped the activities of someone running a Stingray in two locations in Polk County and I know they have attached the thing to my "primary" cell phone several times, however, I am aware that "ears are always listening" and 'The Feds" wouldn't need to use a Stingray to monitor my phone activities.
An opportunity has presented itself for the "perfect forum" to inquire of Mr. Hon if any Polk County law enforcement agency is involved in this activity, and he will HAVE to address this in an official capacity.
I would like to talk to you about this matter further, but any future contact would have to be face to face. If this potential collaboration is of interest, respond to this email and I will give further details on how to proceed.
My pen name, J. P. Zenger is a shortened version of the name John Peter Zenger. If you are not familiar with this historical figure, google it and you will know that I take the First Amendment VERY seriously!
J. P. Zenger 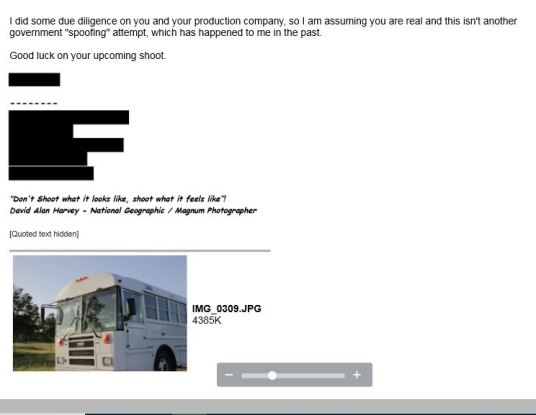