Attempts by SJC PCT 3 Constable Sam Houston and his office to stifle the flow of public information by making illegal demands, misquoting the OAG, impersonating an elected official and just plain old intimidation tactics failed miserably when arrayed against the Truth.

Allegations of illegal stops within the Trails End Subdivision in far southwest SJC by the constable and his deputies sparked the initial inquiry by The Sentinel in the form of an Open Records request.

The private subdivision, it is alleged, has been the site of more than one 'traffic' stop by the Pct 3 constable and his deputies.  Assertions by the constable that "The POA" gave him permission when questioned about the incidents were relayed to The Sentinel and led to the wording of the original O.R. Request submitted to Constable Sam Houston published just below.  The twin columns of pictures below the original O.R. request is the timeline of emails that illustrates the utter disregard for the law that is constantly displayed by Sam Houston and his troops.

The Sentinel has not received the open record documents yet and it remains to be seen if there is indeed a letter from the Trails End P.O.A., an entity that does not exist.   Texas State law allows a private subdivision that has its entrance road connected to a state highway to vote by majority to allow law enforcement to enforce speed limits on that one main drag only.  "It is a gray area", one legal scholar submitted using Cape Royale as an example.  "If a kid was stopped for speeding but had no license, he could be ticketed for the speeding but not for lacking a driver's license".  Cape Royale does intersect with a state highway though and that is not the case with Trails End Subdivision.  Nestled between Lee Turner Rd and Fostoria Tram Rd, Trails End only intersects with county roads. 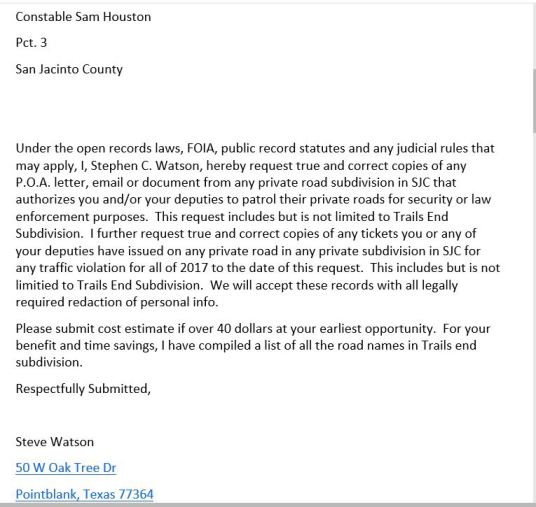 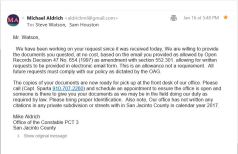 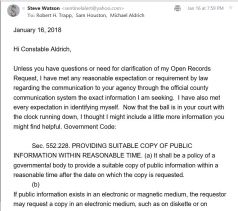 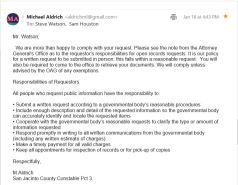 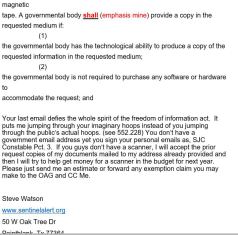 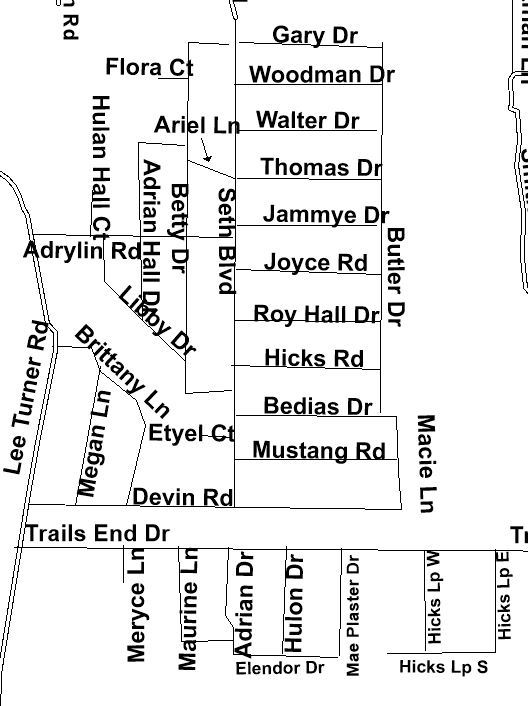 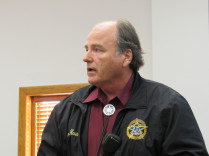 When The Sentinel first texted Sam Houston asking him for his email address, he called The Sentinel directly, not recognizing the number and offered, "Do you want my official email or personal?"  My reply was, "I wanted the official email address, but I already found it."  At this point, Houston asked, "Who is this?" to which I replied, "This is Steve Watson, publisher of The Sentinel Alert."  There was an immediate, "Ohhhhhh, I have heard that name." CLICK.  The Sentinel could not help but grin ear to ear on that note, finish the open records request I was composing and submitted it via Houston's official county email address.

The chain of emails above was the entertaining result.  Some points to note.  My submission was via the county email address for Houston.  The reply was on a 'gmail' address indicating a personal acct but the signature identified the sender as, "San Jacinto County Constable Pct 3".  In good faith, The Sentinel warned whomever the imposter (not the constable) was that he was not the constable and for him to identify himself as such was a crime.  We gave him some recommendations and moved on to the matter at hand.  The imposter wrote me back with the 'gmail' acct and again identified himself as the constable.

The rest of the emails illustrate the ease they have in violating the law and one of the quickest about faces that we have seen in resistance to providing public information.  I especially got a kick out of the attempt to force me to call and meet with “Capt” Peter Joseph Sparta to retrieve my documents.

Sparta is Houston’s fellow sexual harasser and chief deputy that was the subject of an expose’ article on The Sentinel regarding his conviction for ‘Attempted Aggravated Sexual Assault of a Child’ that occurred before he was 21 and was judicially sealed.  At 17 my parents had one child and my dad was serving in the armed forces.

TCOLE’s Kim Vickers told The Sentinel, “I can’t use that information because of the judicial seal and you could be sued for using it.”   Ho hum.   The Sentinel does intend to take opportunity to interview Peter Sparta but it will be when and where at my choosing.  We have questions for Sparta.  “Why did you and Sam Houston lie to elected officials in your Prct and SJC claiming the convicted sex offender was a twin brother of yours that doesn’t even exist”

Then the questions would move on to the illegal confiscation of cash from motorists that were stopped by Sparta, Deweise and the constable himself that have been alleged by several including law enforcement personnel.  Confiscations that are documented to have occurred and then not been documented for the paper trail as required by law.  If I am not mistaken, one of those stops is alleged to have occurred in . . . . . . . Wait for it . . . . . . Trails End Subdivision.

So you see, despite maldrich’s claim to be constable and that this matter is concluded (see his last email) it is just beginning.