Just for total transparency since Montgomery County Police Reporter brought the topic of the shooting up and has chosen to attack the credibility of The Sentinel Alert, we have decided to put up more 'wide angle' shots of the scene of an officer involved shooting along with some observations and questions.   The cameras used to record activity in and around this store are designed for long periods of filming and the frame rate is reduced to cover more hours without filling up the storage capacity.  That is why many of these shots show a 'shadow figure' of the preceeding position along with a solid shot of the current position.  In this first shot, notice that the suspect has no 'preceeding position shadow' like the deputy does.  The suspects shadow is crisp and clear indicating no movement in the time it took the deputy to move 8 feet, pivot and begin to unholster his weapon.  In this frame, the gun is in mid air, the suspect is on his hands and knees looking at the deputy and that the deputy has NOT drawn his weapon yet. 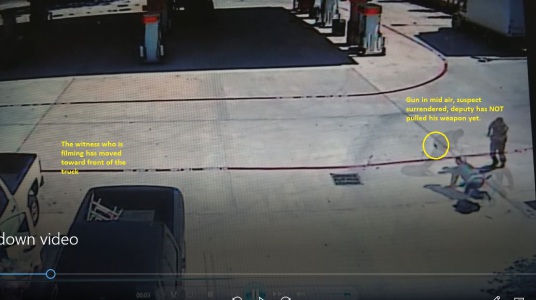 In this frame below, there are two images of the gun which was in motion and two images of the deputy who is still in motion but the suspect is in the same submitted posture with only one image of his body again proving no movement.  This shows that the gun hit the pavement 12 feet away in the view and hearing of the deputy and the suspect was already submitted with both hands in plain view.  The deputy had time to move over three more feet, finishing drawing his weapon and take aim.

When this video was submitted to The Sentinel, he did not offer any comment or observations but just requested that we review the footage.  I reviewed it my self first.  Then I asked another journalist to review it without offering my comments.  Then I requested a long time elected lawman who has deputies under him to review the footage.  This is the point where that lawman raised his first objection noting that the deputy is aiming at the head, not center body mass as ALL LEO training teaches. 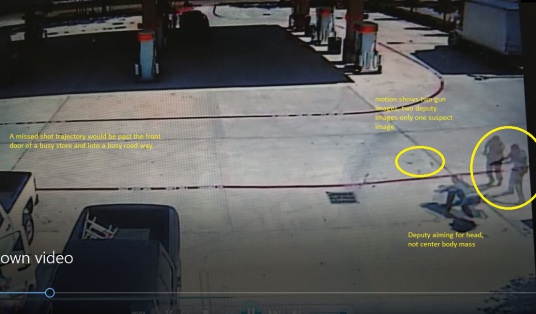 In this next frame (close in for maximum clarity, not to hide anything mcpr), the deputy has just fired the first shot striking the suspect right between the eyes.  Note that the pistol had come to rest 12 feet away with the hand grip facing away from the suspect. 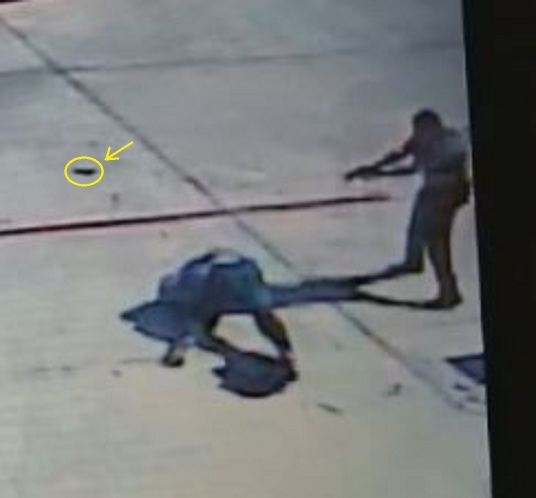 This view is right when the second shot was fired striking the suspect in the right temple through his helmet.   This is where the highly respected and experienced lawman noted, "I won't second guess the first shot because I am not in his shoes but the second shot after the man is down and no longer a threat violates ALL LEO Training". 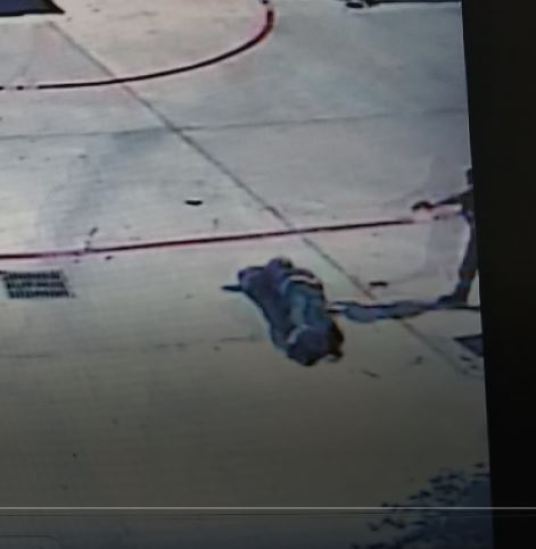 This last frame, since MCPR wants a wide angle view, PROVES that the witness did video the tampering with evidence.  Is that why his video was deleted MCPR?  Can you find out why since your wife is /was the PR person in pct 4?  My phone number is listed. 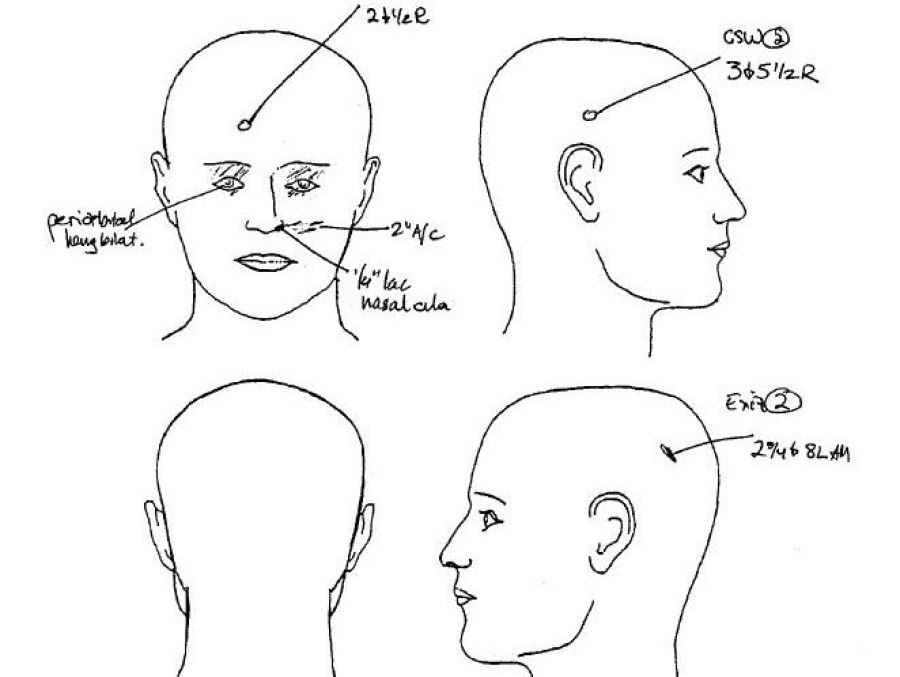 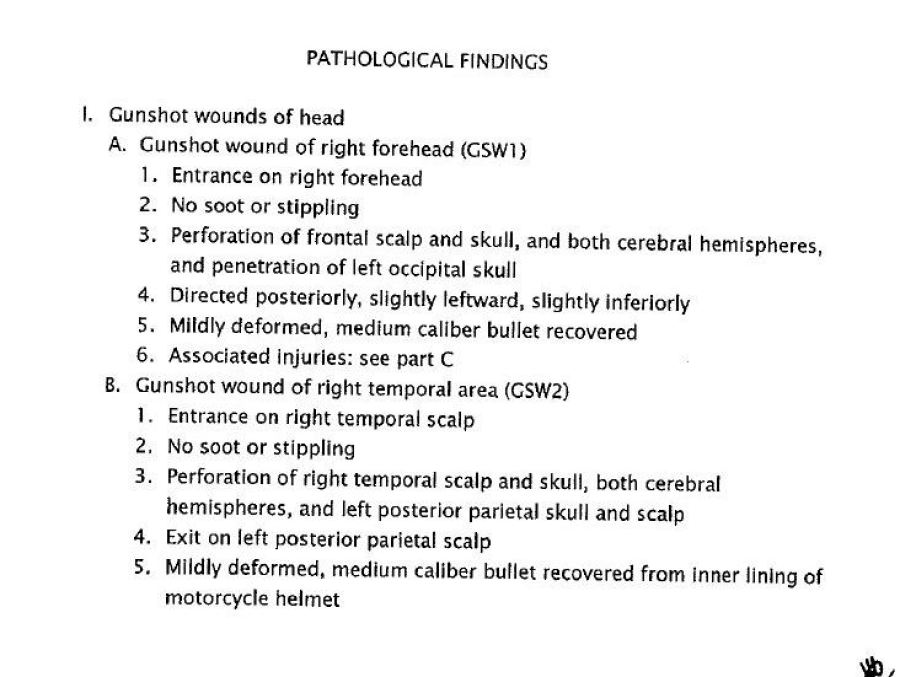 Jeff Buchanan joins forces with the publisher of the Montgomery County Police Reporter in attacking the credibility of The Sentinel Alert with claims of hidden agenda and false narratives.  It is a common tactic we encounter when exposing corruption in public servants.  NONE have ever proved The Sentinel a liar. 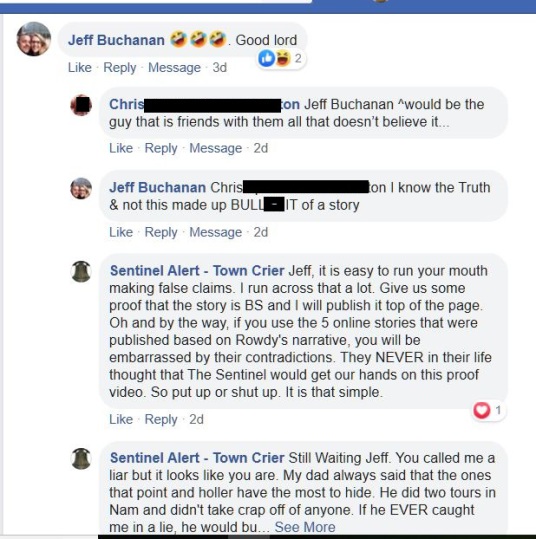