No resolution in the sentencing phase of the case surrounding the death of PCSO jail inmate, Antwaun Bogany has been reached as of yet.  According to someone close to the investigation, the best offer to settle was to reduce the State Jail felony charge of injury to the disabled with criminal negligence to a misdemeaner with 15 days in jail and suspension of the jailer's license as full punishment.  Texas Penal Code 42.o9 requires harsher punishment for someone who lets a dog die for lack of medical treatment.

Liberty county jail was cited for being out of compliance with the state's standards in April and is still out of compliance.  Liberty County had an inmate die a few weeks ago and has another inmate who is epileptic but denied his medication.  According to sources in the jail, the inmate had three hard seizures in a short time and was bleeding from his mouth when staff came and took him out of the tank and put him in a cell by himself.  He was later returned to the tank and STILL NO MEDS.

What is painfully apparent in East Texas is that bottom line budget numbers outweigh the responsiblilty of these county jails to see to the medical needs of people in custody.

The Natasha Atchley murder, some alledge rape and murder, remains unsolved twenty six years ago today.  The Sentinel has worked on the case a bit and even called a prison to request an interview with an inmate a year ago.  The next day, a cold case investigator called and asked me not to do the interview so as not to interfere with their investigation.  "They will lawyer up" was his reasoning if I contacted the man serving a 60 year sentence for a ten year crime in the TDCJ unit farthest from here.  "He was railroaded for what he knows and his entire inheritance stolen by the system" one friend claims.

A group of local sleuths, friends and family have refused to let the case die.  The reward has been increased and new eye witnesses have come forward with very disturbing but matching stories.   It has long been said that it was a Polk County crime that happened in San Jacinto County.  There is a group on facebook called 'Justice for Natasha' that is keeping the investigation alive, challenging the status quo and invading the heretofore power structure with social media that has become more powerful than the old guard that has kept their secrets so long.   Social media that brings distant witnesses to our very livingrooms.

A disappointing result from local law enforcement and the prosecutor's office in Polk Co dragging their feet and giving Linda Vincent, wife of commissioner Ronnie Vincent cover for her crimes has backfired.

The Sentinel was challenged by the local Ranger with, "We don't start an investigation on a say so" and then DA Lee Hon totally ignored the issue despite The Sentinel's track record of accurate information.   It is not the only allegation of turning a blind eye to crimes committed by those in power that have been leveled against either man.  But that is another investigation.

The Onalaska community was miffed and has had a belly full of the good ole boy system and has responded with production of the documents that are needed to prove embezzlement of FFA/4H Buyer's Club funds during Linda Vincent's tenure as treasurer.  A cooperative effort between several members in the community has resulted in evidence that warrants investigation.

Not all of the principals are known to The Sentinel.  One had access to actual bank records.  One had access to FFA Buyer's club records.  Another had access to dates and information that has been compiled over several years.  Another knows me and had enough confidence that we would protect their identity and do the right thing with the information that they collected them up and made the documents available to us via courier.   Only one is published above.  It is a bank record that shows the purchase of a cell phone, dinner for the Vincent family and a hotel paid for with the FFA/4H kid's money.   The 100 dollar cash withdrawal was done at an atm.

There are quite a few other instances of personal expenditures that had the effect of causing the Buyer's Club to bounce checks and incur many overdraft charges.  Another document is a forged letter on the bank letterhead explaining away an issue where Linda Vincent was questioned about disappearing money and 'the bank' took responsibility.  The only problem is the name of the signer is miss spelled and that person has confirmed that they never saw the letter much less signed it.

As is a Sentinel practice when an unsatisfactory answer is given at the local level, we often contact the tallest hog in the trough (no pun intended regarding the Vincent hog selling enterprise) to get some answers.  Why was this ignored?  What is the connection?  How deep does the embezzlement go?  How many organizations that Linda and Ronnie 'Boss Hogg' Vincent were involved with are missing money?  A short list of outfits that the Vincents had their hands in are, Little Dribblers, Texas Junior Livestock Assn, Polk Co Youth assn, Library Board, School Board.  There are others.

These documents will be made available to any official investigator that believes it warrants further investigation.  My number and address is posted in the left column.  Come see me. 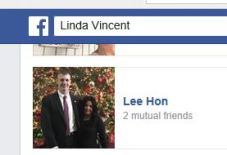 A response to an email inquiry was received at The Sentinel offices. We will share that with the readers soon.

Too Late ma'am.   We already have a sneaking suspicion why no one seemed interested in prosecuting you three months ago when The Sentinel brought the information to Polk County officials.  Stay tuned because we have several more fb tidbits we will be sharing this coming week.

Linda Vincent, wife of Polk County Pct 2 Commissioner Ronnie Vincent has violated the complete trust placed in her by the FBC Onalaska for many years according to Sentinel sources.  Our investigation has shown a pattern of forgery, fraud, theft and embezzlement that has racked up a total in excess of a quarter million dollars over quite a few years as Ms. Vincent held the position of church secretary.  Sources close to the matter state that church minutes were forged granting Ms. Vincent permission to cash in some FBC Certificates of Deposit in a local bank.  When interviewing an official associated with the Baptist General Convention and the local church and attempting to confirm the initial amount as 60K stolen, The Sentinel was told several months ago, "We don't know what the total will end up being because we are just now beginning an audit of all the books and all the accounts."

We reached out to Commissioner Vincent offering to publish any statement he or his wife would make verbatim and got no response.

According to Sentinel sources, The FBC Onalaska has sought help from Polk county prosecutor Lee Hon to prosecute the crimes perpetrated against the church as a combination of stolen CD's, credit card abuse and just plain ole writing checks to family has brought the amount past the quarter million dollar mark.  Reliable sources indicate it may be as high as 300K of stolen money.

Here's where you can enter in text. Feel free to edit, move, delete or add a different page element.